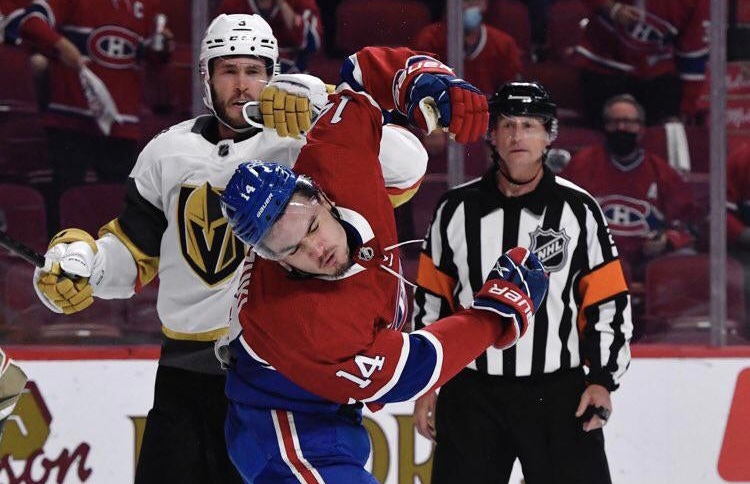 I won’t make this long, it’ll be short and sweet, there is no good hockey if there is no fairness.

No one likes Bullshit and the officiating to get the Montreal Canadians out can lead to serious injuries and the referees on the ice should be held accountable If a serious injury occurs.

The hit on Weber on the numbers twice has zero room in this sport but we’ve been saying this since the 1990’s and created penalties and other methods of convention to fine and punish those that blatantly have a disregard for safety.

Heres the hit on Weber, look at the first hit Nosek takes on Weber, he glides in directly behind Weber and hits him on the numbers but what saves Weber is the fact he saw him coming and his distance from the boards plus the hit was mostly a nudge on Tomas Noseks part…then if it wasn’t enough Nosek then delivers a second hit on the numbers double handed and throws his body lunging Weber head first into the boards; in this case, Weber is at the exact dangerous limit of the boards that can cause neck ad spinal injuries and doesn’t see Nosek coming and Nosek completes a follow through as he uses inertia and momentum as a tool to deliver the hit, all this as the official looks on from a few feet away!

Just look at the official watching these two hits:

Watch the Video and even the Officials are calling out the referees, Corey Perry is upon in arms about it and Weber can’t seem to cool down even from the penalty box were he shouldn’t be to begin with.

Let’s also take a look at this other play as Mcnabb on David Suzuki, a punch right in the face as the official is watching dead on and listen to the commentators saying shockingly, “you want to lose control of the game, this is how you do it, this is just ridiculous”, “and that’s not a penalty???” “whats a penalty and whats not”!

Chris Lee is a farce and if this was the old days, he wouldn’t dare be doing this type of shit one sided calling!

Now if you’re a team thats untouchable you start feeling unbeatable that the rules dont apply to you and you gain strength and momentum every game and you are able to take chances no one else can, if you’re the team getting called for a fairy pixy dust touch for hooking which never even happened as the touch did not impede the other s play whatsoever your ups shits creek without a paddle.

That means one team can take unlimited chances with no repercussions allowing for the utmost latitude and the other team must play within the rules allowing no chance of error, which is not possible and this creates the fear of getting calls which means they underplay!

Mcnabb got the tying goal in game four but if he was called for the punch in the face he would’ve started the third period with a penalty allowing Montreal a 5 on 3 advantage which would’ve changed the whole game and the fact that McNabb would have had that penalty would have eased his game and maybe not allowing him such latitude of grandeur as to go in so deep on Montreal; let us not forget the 5 on 3 could have set Montreal ups with another goal putting them up 2 – 1.

Chris Lee allowed the clock to run out as the Habs didn’t continue play, since the play was still alive, they could have continued with the puck to put it in the net as the squeamish of McNabb punching Suzuki in the face was ongoing allowing the pressure that Montreal was exerting to disappear!

What can anyone say, this has been going on for years, ever since the priority was to grow the NHL in the USA, The Montreal Canadians fans with revenue sharing have been supporting other NHL teams and we are the ones getting the shaft as Gary Bettman becomes a Hall of Famer in the builder category at The Montreal Canadians expense, what a joke!

With all the BS surrounding the history of the Montreal Canadians since Gary Bettmans introduction as commissioner in 1993, we can just relax and enjoy some of the great talents we have wearing the Jersey and hope our boys can pull off one of the greatest upsets in recent history!