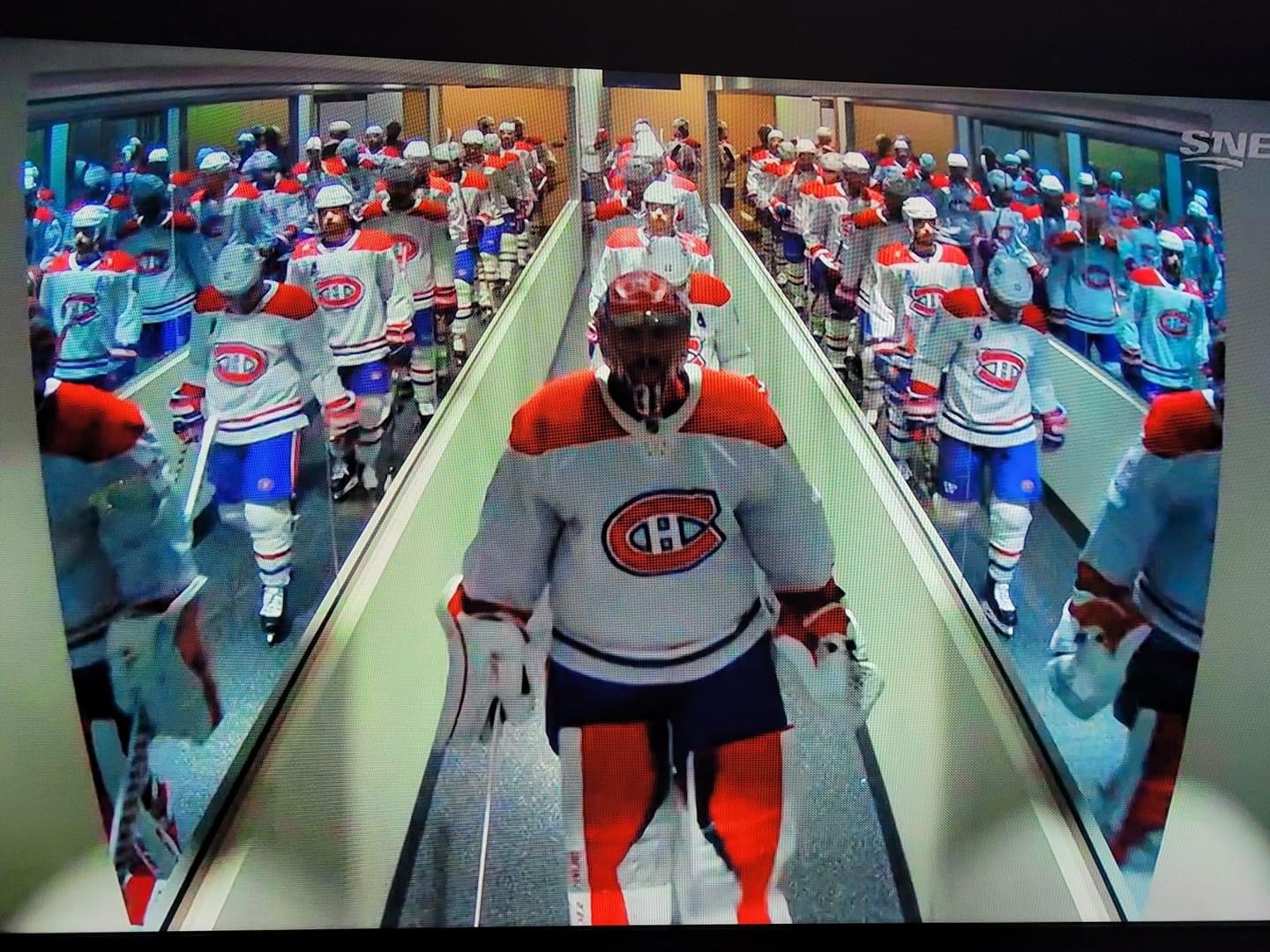 Holy bleu-blanc et rouge batman, what is going on in Montreal Quebec Canada; Its St-Jean BABY, its hot as fuck in Montreal today, its a full moon and we’re one (1) game away from winning the semi finals and entering the STANLEY CUP FINALS; you put these things together and you got crazy fans; we’re crazy anyways but this can make us even crazier, if that’s possible!

The heat is on; “Les Habitants” are full of fire and its growing so big inside of them there’s no control, excitement is so high some people are jumping into cold showers from autonomous sweat glands dripping down their foreheads, their standing in front of screens just waiting for the puck to drop and its not even lunch time yet, the flags are waving from cars, houses, buildings and jimmied superman capes, we’re waving the Montreal Canadian flag together as one, we’re at the point of auto combusting!

We’re hungry, we’re excited, we’re proud, we love our team as much as we love to see the smile on Cole Caufields’ face after he scores a goal, how about Suzuki with his talent for scoring goals and play making, Anderson with his size skill and grit, all we need is for him to keep plowing through their team, blocking their goalies vision and either scoring or creating chances for our boys up front, we can see the level of respect in Corey Perry’s eyes when he looks at Price after inhuman saves, the leadership on our team from Weber on defence and as overall Captain is one of maturity strength skill and experience AT a Hall of Fame level, then we have the level of leadership up front from Corey Perry’s remarkable career, also a massive advantage to the team.

How about our Danault once telling us his goal was to bring the Stanley Cup home; huh shivers!

This Montreal Canadians team is one of our greatest teams in recent history; Jesperi Kotkiemi is tied with some of the greatest players to ever play NHL hockey and when he scores his next goal will surpass them in the under 21 age group.

How about our Carey Price; the show stopper, crowd husher, supreme team motivator between the pipes, Bob Gaineys present to the Montreal Canadians, in Price we Trust, The Price is Right, the Wall… Carey Price is big, fast and agile – he’s like a mix of Spiderman and Colossus, that’s right, almost nothing gets through him and he senses plays before they happen and he is so fast and agile that even Spiderman shakes his head in disbelief at some of the saves he makes.

I could talk about anyone on this team and it would be positive, Paul Byron has been a dream come true and has lifted us in times we needed him too and makes the other team question themselves on the Power Play, Lehkonnen has been amazing in scoring goals and forechecking, Gallagher just frustrating the opposing teams lines and keeping them off the sheet as much as humanly possible, Petry with his calmness in handling the puck and getting out of the zone, and on and on…

If I was Vegas, I think I would call in sick, how are they supposed to win this game and then leave the Bell Center in this atmosphere, where do you go, maybe a B-line from the bus with accompanying diversion busses under police escort back to the plane and fly away. Habs Fans are literally doing nothing but thinking of tonights game, some of us are most probably going to be drunk by the time the puck drops in the first period but we won’t falter, we will continue drinking until the game ends, we will be partying until the sun comes up, we believe!

I really wouldn’t want to be Vegas in Montreal tonight, they must be thinking the same thing; people like Pacioretty know how we are and what of the others with family here like: Fleury-Roy-Marchessault..Quebec natives, to name a few that has grown up living in the essence of “Les Habitants”, they very well know the Quebec mentality.

They don’t want to be here tonight and I’m sure Vegas dent want to be here tonight either, any other night sure – but not tonight, not with our fanatical fans, our 3500 fans in the Bell Centre is louder than their 18000 fans and if we had 21500 in the bleachers, our nose bleeds would be so loud, the roof would come down; how about the high humid heat, in the 30’s today making drinking easy, then add the most celebrated Quebec holiday St-Jean Baptiste – all fans of “Les Habitants” and a full moon to boot; NO WAY Vegas isn’t nervous as hell!