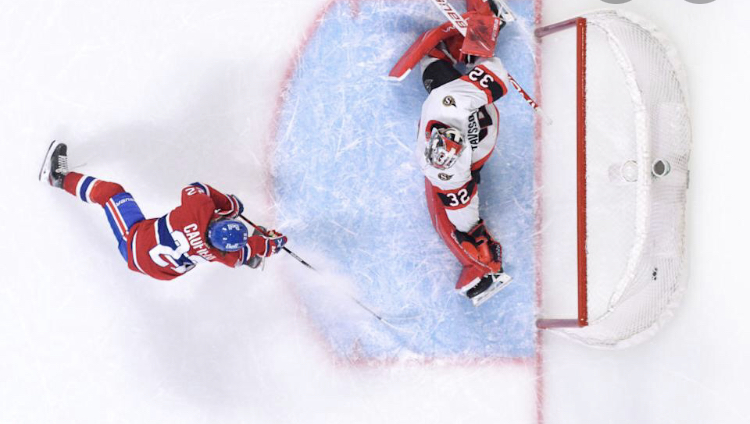 Why bother, why bother at all If you think its over in the middle of a battle; you already lost, call it what you want, self fulfilling prophecy or quitter, what you need in dark times is hope!!!

Thats right and The Montreal Canadians are far from losing the war, battles are won and lost, there’s push and pull, give and take but its not over until one side just can’t move anymore or there is no more time in the game; this is true in the game of life too!

If England would’ve given into the German empire of World War Two with Germany’s sophisticated technology always reaching new limits, creating the V2 Rocket which today lies as the blueprints of the first shuttle and to the creation of NASA to get the USA to the moon and is now the basis of all rockets, there is no way World War Two would’ve had the outcome it had if England would have said fuck it, they’re too big, we’re being pounded to the ground, we can’t do this, no, they regrouped and countered in ways they needed too, they used their wits, taking off all street names and directions and names on stores to confuse the enemy, they used cunningness as decoys as the blow up tanks and fake diversionary tactics, sure they had the USA and Canada step in but they didn’t give up, they had hope and thats what created the opportunities.

The Montreal Canadians lost game two, not because they didn’t stand a chance, The Habs kept Tampa Bay out of the Montreal zone for the whole second period and we shot on the oversized equipment of Vasilevzkiy, did you know that Price and vasilevzkiy are same weight and height (only five pounds more on Vasilevzkiy) but Vasilevzkiy looks like a Jumbotron, like a giant and it almost seems like there’s no net behind him, he looks like he takes up more net than Robin Lehner who stands at 6 ft 4 inches and weighs 240lbs or Ben bishop at 6 ft 7 inches and 225 pounds.

Look, we lost because of Stanley Cup finals inexperience; inattention to details, letting down our guard and Stanley Cup jitters, not because Tampa Bay is a much better team; sorry, its true, go look at the goals.

So you might say, c’mon Aidan, did you see the second goal that beat the buzzer, that was a beauty. Of course I saw it, it was a beauty that should have NEVER happened. I was just getting up to go do something, seeing there was 2 seconds left and Montreal should have just controlled the puck in their zone to kill time. Instead, I saw the Montreal Canadians taking out the puck to centre ice on the defending cup champions shown very little respect if you really think about it, thinking the period was coming to an end most players on the Montreal Canadians turned off, creating a turn over in the neutral zone with Tampa’s two forwards looking for exactly that type of error and then putting it into overdrive with a second left on the clock, taking the Montreal Canadians completely off guard and scoring a backbreaking goal with 0.3 seconds in the second; I’m not taking away the effort made by Tampa here or the great goal in the process which, in my opinion is highlight reel.

Look at the third goal too, Edmundson blindly passing it to a shouting player (Palat) that taps his stick on the ice, Edmundson thinking its Petry blindly passes the puck with a backhand and only to find out that it was a Tampa Bay player (Palat) doing the shouting and stick tap, something we have all done in street hockey or ice hockey and its done at all levels in all sports, its the most simple of all simple tricks and it worked, Petry caught flat footed as Palat was streaking in past him and Price staring at kucherov that passed through the crease for what we can easily call a lengthly time.

We can also look back to game 1, the first goal by Cernak was a beauty, great deflection and not many goalies could have stopped that, the problem here is why is Cernak all alone in the slot at 13:41, the second goal was also a beauty from Coleman on the rush but the only reason they were able to score that goal is because Coleman is in the slot once again as Gallagher didn’t pick up the guy flying by him, picking up the lose puck in the slot from a blocked shot. Going into the third period, The Tampa Bay lighting was only leading by one point, it was 2-1 Tampa; thats not a team overwhelming us.

The third goal at 18:04 in the beginning of the third, Nikita Kucherov backhands a lobber towards centre ice from the side boards as the puck flies aimlessly into centre ice with no danger to Price Charot attempts to bat it away, instead his attempt is missed and he puts the puck in front of Price, now putting the puck in a very serious position, Charot in a second attempt tries to bat it off his stick putting it into the net, this was the Montreal back breaker, Charot could’ve let the original backhander go and it would’ve went to the other side of the ring, instead Charot put it dead centre in front of Price and it becomes a back breaking goal in that game, the fourth goal was because kucherov was allowed to take centre slot once again and score the fourth goal of that game for Tampa.

Most goals that Tampa has scored on us were avoidable, take your man, keep them out of the slot and make Price see the shot.

The Habs have some adjustments to do and they made the initial ones from game one into game two and we saw that those changes allowed The Habs to dominate the second period but inexperience and inattention got the better of us.

We cannot allow one moment of relaxation on the ice, the Tampa bay lightning are the defending Stanley Cup Champions and they deserve the respect going into every game, they are playing until the buzzer sounds and that means even if one second remains on that timer always remember there’s another team in front of you waiting for a mistake, a chance to pounce when you drop your shoulders.

We also need to watch with our eyes and not blindly pass the puck with our ears alone, we need to know where our teammates are and where the opposing team is at all times.

We cannot afford to allow the the Tampa centre man to take the inside of the ice for those deflections, make their centre guy suffer for being in the slot, make his job so impossible that his stick would never make contact with a puck coming his way, if their D’s taking a shot, open up the shooting lane or block it like Chelios or Carbonneau; don’t just stand there so the shot goes through legs and 4 bodies before Price sees a rocket coming in from a foot away.

On offence , we need to take centre ice, shooting from the outside lanes on diminished angles on a guy that takes up the net wearing massive equipment is not the best way to do it, unless you have the skills of, “A LA Guy Lafleur” rushing down the right side of the ring, full speed, getting the goalie to move short side as you launch a one time wrist shot in full flight to the far side of the open net scoring a beauty or if a save is made, you would need your winger coming in to get the rebound because those shots on net are hard to hold onto!

Cram the net, get Vasilevskiy off his game, get their D upset so they make mistakes, shoot hard on Vasilevskiy’s pads so our forwards can get the rebounds, stop looking for top corners only, other teams tried that on Price and we loved every minute of the opposing team missing the net.

Look at our players, we have a crazy team, I wouldn’t change a thing except for getting Webers hands back so he can take those big one timers again making people move out of the way or regretting they ever stood in front of one of the hardest fastest shots in the league for nearly his whole career losing out only to Zdeno Chara for multiple years.

I think the Montreal Canadians have the talent, the experience and skill in the players that you need to win a Stanley cup; we just need to remember that we can score too!