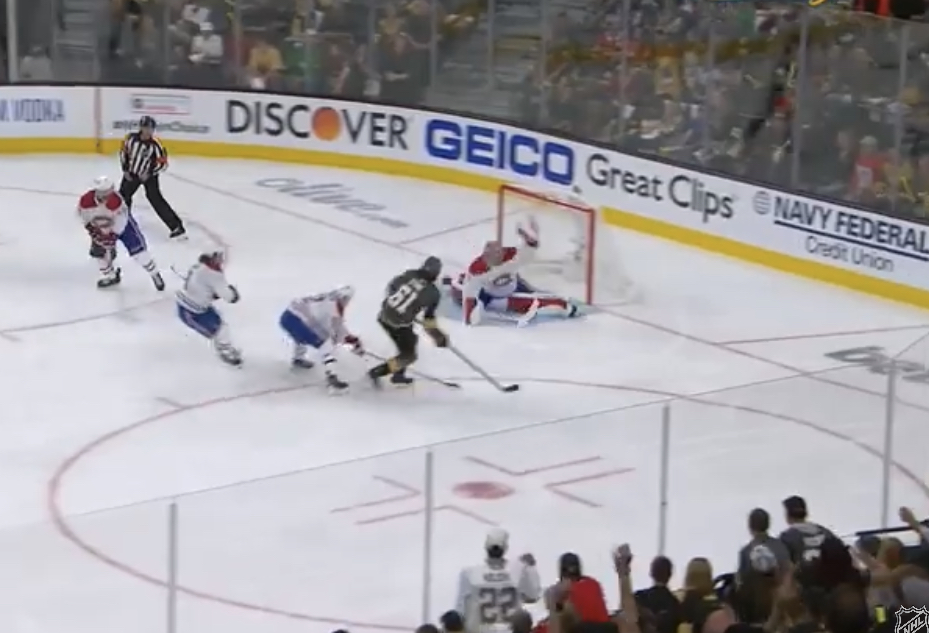 The Montreal Canadians did not look like the team that defeated Toronto and then Jets in an 8 game winning streak, this Montreal Canadians came shooting out of the box in the first minutes but the goal that started the 4-1 Vegas knights win knocked some of the wind out of them, the second goal hit them even harder.

They were getting penalties and their game slowed down, they stayed fixed in shooting lanes instead of the aggressive forechecking we’ve seen from them, they seemed to also lack speed, Caulfeild scored his first series goal to bring the goals down to half 2-1 but only a few minutes later Vegas scored a goal from the blue line that seemed to have ricochet off the stick of a Montreal Canadians player that just wasn’t moving.

The first goal came off a nice point shot and seemed like Stone touched it or Stone got enough in the way to disrupt Prices view of the puck, in the end it was Shea Theodore that got the goal.

The second goal was a lack of defence again, as Alex Martinez was so open for a shot that the defence had enough time to fake it and pump a pass dead on the stick of Martinex leaving Price completely open for a one timer from circle area, Martinez was so alone that he could hear crickets chirping, on a 5 on 5, this is completely unacceptable.

The third goal was any better 5 on 5 and a shot from the point from Mattias Janmark, no pressure on the him whatsoever, he actually had the time to tie up his skates, lick his finger and lift it in the air to try and analyze wind direction.

The fourth goal was another cross ice 5 on 5 situation with a man open.

So whats going on, many factors can come into play here.

No matter the situation, I didn’t recognize the team, turnovers, penalties, opposing teams men open for one timers, dumping the puck, giving them the puck, losing battles, not taking centre ice…the list was endless, something was wrong.

The only person as usual that showed up was Carey Price, if it wasn’t for Price it would’ve been 5 – 1 early in the game as Price just endlessly robbed people like Stones breakaway top corner glove save or the cross ice pad save or redirected toe kick…Price showed up, he wasn’t the problem, the score definitely doesn’t reflect the his performance, it was a lack of defence and offence, Price was alone at it again as usual.

I’m not kicking Montreal when their down, its just game 1 and it was obvious something wasn’t working, some would say that Vegas was maybe just too good; I didn’t see it that way, it seemed as if something was wrong with the Montreal players, they seemed tired, lethargic and didn’t have the legs, they weren’t skating.

I’m betting game two will much better and we should take that one.