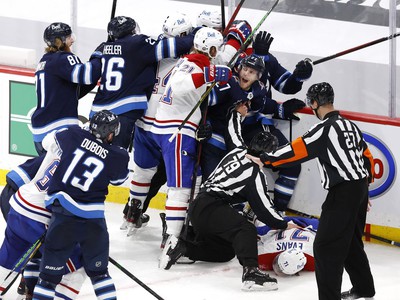 The man who held bak a mountain of players from trampling over The Montreal Canadians was N. Ehlers Number 27 and he did this weighing in at only 172 pounds, when you compare to the list of players he literally held back almost on his back the combined weight of all those guys is easily over 1000 pounds and he did this on his skates.

Even though we saw a nasty uncalled for hit where a guy eyed a player, saw his vulnerability, decided not to play the puck at all, position himself for the hit by lowering his centre of gravity, side step into it in order to get his shoulder into the initial strike as he lifts and springs himself into the hit following through so completely that he leaves the ice both feet and uses a nearly complete arm extension follow through pushing away the player through the air after the initial impact, the hit was so complete that Scheifele was off his feet and his trajectory was still in a forward motion through the air after plowing through Jake Evans, Scheifele ends up landing on one foot with his upper body in forward motion as Jake Evans was lifted up into the air and back as he had no idea the hit was coming, Jake Evans was lifted off his feet and thrown backwards up and over due to the follow through to do a nearly full 180 degree flip landing on his face and shoulder.

The hit was so disgusting to watch especially with less that 0.58 seconds left in the third period with no chance of coming back that Scheifele was awarded 4 game suspension which may have cost them the series.

but when I look at that replay, I remind myself to watch the rest as another player on the Winnipeg Jets N. Ehlers number 27 is doing everything possible to protect our defenceless player lying unconscious on the ice from not only his players but our players too looking that was looking to avenge Evans.

Respect for number 27 N. Ehlers 172 pounds of pure heart; the man that held back a crushing mountain of players on his back to protect an opposing teams player.